Side by Side Shotguns: Best Brands in the Market Image from Yes 4 The Northeast

There are plenty of good reasons to have a side by side, also known as an SxS, shotgun. Before we get into the ins and outs of trap and skeet shooting, first we’re going to discuss the best side by side shotguns that are on the market and why they’re so fantastic.

The Best Side by Side Shotguns 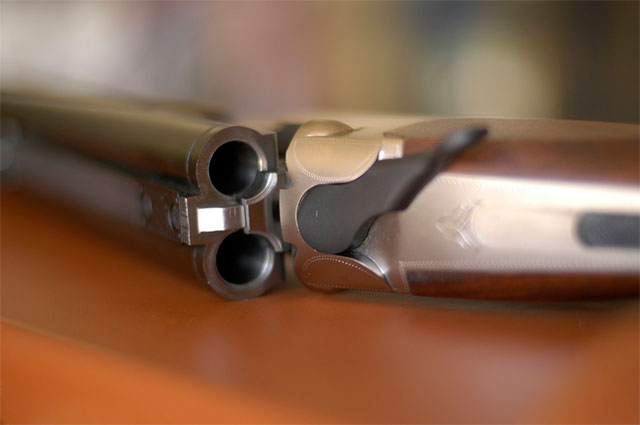 Double guns or side by side shotguns are expensive to produce due to the mechanisms on the inside and the fact that there isn’t a huge market for them. Even so, here is a list of some of the best ones around. Some are in current production while others are antiques and have not been made in quite some time.

Originally manufactured prior to 1967, this gun was discontinued for over thirty years. It was reintroduced in 1999. It is available in 12, 16, 20, and 28 gauges with the option to choose a double trigger or a single trigger.

Made in Turkey, these side by side shotguns were introduced in 2002. They are also produced in Italy for certain models that Bernardelli produces for sale. They are typically available in 12, 16, and 20-gauge models.

This gun was available as a Grade I or Grade II shotgun. The Grade I is more simplistic in its stylings, while the Grade II has more intricate engraving. The gun was made in Japan and was a highly-regarded part of the Browning family until it was discontinued in 1988.

The AH Fox is one of the most well-known side by side shotguns. It was owned by the likes of Theodore Roosevelt and Nash Buckingham. This particular gun was first manufactured in 1898 and was discontinued around 1930. It is one of the most sought-after collectible shotguns.

These shotguns were produced during the early 1900s, discontinued in 1949, reintroduced in 1969, and then discontinued for good in 1971. It is also considered to be a historic model, and so is desired by gun collectors the world over. You can expect to pay several thousand dollars for one of these if you happen to find one.

Parker shotguns have a rich history. Founded shortly after the Civil War, Parker made many different models of side by side shotguns. They were famous for their quality and reliability. It wasn’t until Remington came on the scene that Parker took a hit and never fully recovered.

These Winchesters are easily one of the rarest side by side shotguns to have ever been made as there were a limited number of them made. They were discontinued in 1960 like many of its peers because it simply wasn’t profitable to make them anymore. The only way you could get one after that was if you requested a custom gun, at least up until 1991 when production was altogether stopped.

Tips on How to Buy Side by Side Shotguns Image from The Appalachian Online

You’re going to find most of your side by side shotguns online since there aren’t very many actually manufactured anymore. If you find yourself checking out online auctions, you’re going to have to understand that there is some sort of risk when considering purchasing a gun without seeing it firsthand.

You’ll have to ask plenty of questions if you can’t hold it and look at it yourself. If you can take a look at it, then there are some things you’ll need to look for. Here’s a quick list of tips to help you out when you’re buying an SxS and know it’s a good deal.

Look for cracks in the wood. You don’t want to purchase something that has cracks or chips because you have no idea how they got there. They usually indicate the gun has not been well-taken care of.

You’ll also want to see if there is any indication that repair was done to the wood. It might be paint or maybe wood filler, or even uneven shaping, but if you see anything that seems off, steer clear.

Don’t forget to look at where the wood meets the metal. Is it lower, higher, or even? Lower or higher means that the wood is warped, so the gun likely wasn’t taken care of properly.

Examine the Metal and Checkering

Double check the checkering. That means making sure that it is clean and in overall good shape. Yes, there might be some expected wear, but if the gun has been handled with care, then the checkering should look great.

At the same time, look to see if the checkering has been refinished. If you’re not sure, then ask if it has and ask why it was refinished. For some antique side by side models, you don’t want to get a fun that has had its checkering refinished because it lowers the value of the firearm.

The same goes for the metal on the gun. Depending on the age of the gun, it is entirely possible that the bluing that once existed may have developed some sort of oxidation. That’s not always a bad thing if you’re looking at guns that hold their value. If the metal appears to have been refinished, that may or may not be a good thing, again, depending on the model.

Take Notice of the Mechanisms

Look at the lever, too, and notice whether or not it is where it is supposed to be and not loose or too difficult to move. Don’t forget to check for movement of the barrel and receiver.

If you experience movement between the receiver and the barrel when the gun is entirely closed, that’s a problem. It should feel solid. Anything else means that there is potential for a dangerous situation if that gun were to be used.

There are some more obvious things you’ll need to consider, too, but in your rush to buy a shotgun, here’s a refresher to make sure you remember to look at these before you buy.

Check the lengths and weight of the gun to make sure it’s a size you can handle. Check for pitting in the barrels, too. Pitting means that the gun has nearly lived its lifespan. Yes, you can sometimes get the pitting refinished, but it may be too deep even for the most experienced gunsmith to repair.

You’ll also want to know what the gauge is because if it’s more than you or the shooter can handle, it can be too much for you. Ask if there are any chokes, too. They’re useful when you’re shooting to keep your pellets more concentrated.

Where to Buy Side by Side Shotguns Of course, that’s not including the ones that are still manufactured today that you can find from authorized dealers. You’d have to check with the manufacturer or the dealer to get some direction as to who would need to be contacted first to get the gun delivered to your area. Image by klimkin from Pixabay

Time and time again, the question is posed about using side by side shotguns for trap or skeet shooting. The truth is that there is no best gun for this purpose. Sure, there are side by sides that are among the best in that style, but they’re not really useful in shooting clays.

There’s a reason for that though. When you look out over a side by side, your sighting plane is significantly bigger than that of an over/under shotgun. This makes aiming to shoot more challenging than even using a pump-action or semiautomatic.

Consider, too, that the top shotgun manufacturers for clay shooting don’t give any credence to a side by side shotgun for shooting sports. They’re all going to be manufacturing something else. That doesn’t mean a side by side isn’t a good gun because it is. It’s just not the best gun for trap or skeet shooting.

If you look, though, you’ll find some side by side only shooting events, but those are few and far between. They’re not usually taken seriously as they are more fun in nature because it gives shooters a chance to use their side by side shotguns. Serious competitors would never take a side by side shotgun to the front lines and set up for shooting clays because they know the accuracy simply would not be there.

Generally speaking, SxS shotguns are used for hunting birds like quail or duck. They are easy to shoot and lighter than many over/unders. Keep in mind, too, that the recoil is different on a side by side, so when you shoot, you’re getting a different experience.

The push back from side to side that you get from an SxS is going to feel very different from an over/under shotgun that goes up and down when it recoils. The way the triggers work feels different, too.

Over/unders typically have a single trigger that automatically goes from barrel to barrel when shooting. A side by side usually has two triggers – one for your trigger finger and one for your middle finger. Unless you’re used to pulling the trigger with your middle finger, you’re not going to get the best and crisp trigger pull that you can with your trigger finger. That makes a difference when you shoot.

The reason is that if you’re focused on pulling the second trigger with your middle finger, then you’re not focused on your target. This increases a greater likely hood of missing the target when you’re skeet shooting. Side by side shotguns have their place in the world of firearms. You can even take one with you to a skeet range if you want to have some fun shooting something you don’t normally get to shoot.

If you want to get serious about skeet or trap shooting, though, then bypass the double barrel SxS and pick up either an over/under or semiautomatic shotgun instead.

On the other hand, if you’re going hunting because it’s duck season, then by all means, go at those ducks with a side by side. They’re perfect for that.