Everything You Need to Know About Yildiz SPZ ME/12 Finding a balanced over-under shotgun to suit your needs for hunting, trap shooting, and home defense can be tricky. Over under models like the Yildiz SPZ ME/12 tend to sacrifice one area you would find in a pump-action or semi-automatic to compensate for another.

But we took a look at the Yildiz SPZ ME/12 in the hopes that this budget-priced over-under shotgun would do the trick for us. We hoped that the budget price was not an indicator of a low performance.

As it turns out, this gun succeeds and fails on a few different accounts.

Who Manufactures the Yildiz SPZ ME/12?

The name Yildiz traces back to a small neighborhood in Turkey, holding a population of about 6,000 people. The company name represents the country of origin for the Yildiz SPZ ME/12, and it’s not one of the more popular names in shotguns.

A quick search turns up minimal listings for sales, but they are still available if you know where to look.

Yildiz tests their shotguns before passing them on to each customer. They use both game shooting and pressure testing cartridges before releasing each gun to the public.

They claim the Yildiz SPZ ME/12 model has gone through 25,000 tests with no failure in all testing. They also use target accuracy tests at specific intervals to ensure maximum performance.

Where Can I Buy the Yildiz SPZ ME/12?

Unfortunately, distribution of the Yildiz SPZ ME/12 is very limited in the United States. An e-mail from Yildiz states that their only carrier through the U.S. is Academy. This means you are out of luck if you want to make a day trip to Cabela’s, or even run to your local WalMart.

You can also try your luck with GunBroker.com but be aware that these are all private sales. You’ll need to check the feedback profile of each individual seller before committing to purchasing a gun in a private sale.

A quick look at Academy’s website reveals the Yildiz SPZ ME/12 will run you between $120 and $500, including the cost of any taxes and shipping. That’s already a great price for an over-under shotgun, but it gets better.

The cost in the United Kingdom, where Yildiz has a much wider market presence, is over 800 British pounds. That converts to over $1,000 at the time of this writing. That means you’re saving a massive amount of money if you can find one in the U.S.

Looking Closely at the Yildiz SPZ ME/12

How well does the Yildiz SPZ ME/12 stack up against similar shotguns we’ve reviewed in the past? We’re going to take a look at how the shotgun was judged by our experts and see if it’s worth occupying space on your shelf.

Upon first glance, the Yildiz SPZ ME/12 is nicely packed. It contains protective sleeves for the barrels and the fore-end, along with the same protection for the action, stock, and the included accessories.

When you put it together, you might be surprised how it doesn’t look as bloated as some of the other over-under shotguns you’ve seen. At least those who are targeted specifically at skeet and trap shooters.

The appearance and color for the stock, with its walnut finish, remind us of other shotguns. So, at least they aren’t skimping in the design of this shotgun. You’ll also appreciate the diamond pattern that lines the area around the trigger.

Picking up the gun

Once you hold the gun in your hands, you’ll understand why the manufacturer designed the Yildiz SPZ ME/12.

Resting against your shoulder, you’ll feel the weight distributed perfectly. This shotgun weighs only about 8 pounds, which is perfect for an extended session at the gun club.

It’s especially comfortable if you decide to use this for an entire day. You could even use it several in a row while on a shooting excursion with your friends.

As a dedicated clay target shotgun, the Yildiz SPZ ME/12 has a valid response time. When we dropped the comb to the lowest setting, we found a decrease of about two inches total. Not a bad shift.

The length of the trigger pull came in around 14 inches, assisted by a firm buttpad that performed well. The grip had a nice and tight direction, adding a palm swell that won’t feel overexerted.

And thanks to the longer fore-end, you have plenty of grip options to do what you want with your forward hand.

Checking out the barrels and lockwork

As you know, the lockwork consists of how the trigger, hammer, and main springs are mounted. That comes right below the sears, found suspended from the top of the frame.

The action body is entirely comprised of steel, which makes this great for longer-lasting weapons. We won’t argue about the durability of the Yildiz SPZ ME/12. With proper care, you can use this shotgun for a very long time.

The safety button is in the usual location next to the barrel selection, but this one is manual. There’s only one indicator for its position, marked by a prominent “S.” You’ll need to remember your right or left for the barrels on this gun: The left position selects the bottom barrel to fire first.

The size of the safety button on the Yildiz SPZ ME/12 is astonishingly small when compared to other over-under shotguns. You’ll also find the barrels put together based on monobloc, where a joint brings together two spigot tubes.

Typically, on an over-under shotgun, there are ventilated ribs. The Yildiz SPZ ME/12 has these in the usual spot, along with sprung extractors.

The extractors actually resemble other models, so you might see some familiarity even if you don’t have any previous experience with Yildiz. 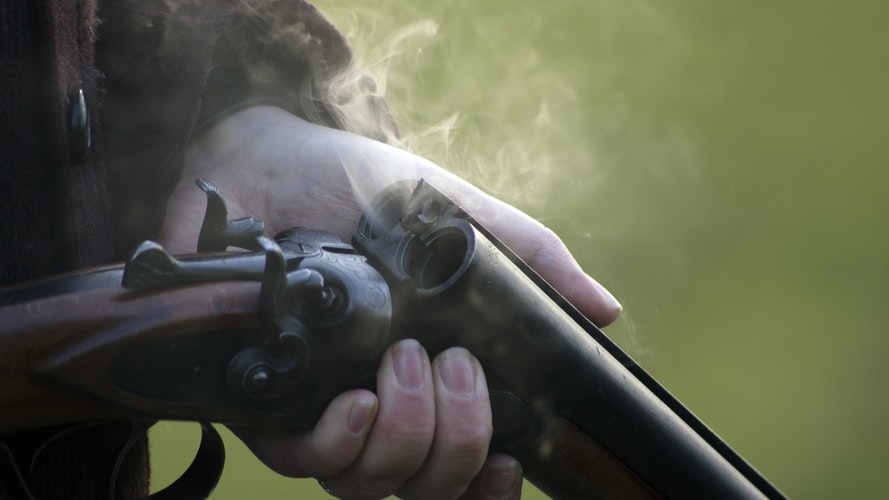 Photo by William Isted on Unsplash

When it came time for us to use the Yiltz SPZ ME/12 for live shooting, we performed the usual testing. We fired off several shots, and while the dimensions are great and the comfort level was approved, we did run into a problem or two.

After about a dozen shots, the trigger guard just fell off. That’s not just a safety hazard, but a fundamental case of bad quality control.

We were able to find out that there was a front stud missing from a security portion of the trigger guard. With such a fundamental part missing from the shotgun, this doesn’t speak well of the quality control used on the Yildiz SPZ ME/12.

Upon bending the guard to force a tighter fit, we found that it simply would not hold the guard in place. We hate having to use duct tape or glue to run a gun through a simple review. But it became obvious that we wouldn’t have any other option if we wanted to be honest.

Another issue: the feel of the stock and forearm. Because of the oil finish contained on the shotgun, we think it contributed to raising the wood’s grain. That made the entire gun a bit rough on the hands.

We couldn’t help but notice that the gun looks “plain,” although given the price of the Yildiz SPZ ME/12, that wasn’t entirely unexpected.

The checkering on the forearm and stock felt forced and ultimately did not feel like it was manual. You’re able to select a few different barrels, with the bottom reaching four and a half pounds while the top hit five. Even though there were some misfires along the way, the mechanical trigger is still a nice touch.

There’s no other way to say this: The chokes were terrible in our evaluation of the Yildiz SPZ ME/12. It’s not the kind of thing you want to encounter when you still have a decent chunk of a review left.

It sours your opinion of an over-under shotgun before you’ve even reached the finer points. But we ran into issues fairly quickly.

When firing test shells with the improved cylinder, we had only a 42 percent success rate. That shouldn’t be happening right out of the box, especially with multiple competition winners on staff.

Furthermore, the modified choke only gave us an improvement to a 56 percent success rate. That’s not promising for a gun marketed toward competitive shooters.

The Yildiz SPX ME/12 is loud. Yes, it’s a shotgun, and you should expect some noise to come with a firearm. But we were amazed at how much we could still hear the shot ringing in our ears. And that’s with the proper protective equipment.

If you’re standing anywhere near the ejection end of the Yildiz SPZ ME/12, watch out. Sure, it’s one of the biggest pieces of common sense when it comes to guns – don’t stand near the end.

That said, the ejection from the Yildiz is crazy. If you’re standing anywhere within five feet of the shooter, you’ll run the risk of getting smacked with a shell case.

Our Final Verdict on the Yildiz SPZ-ME/12

Our time with the Yildiz SPZ-ME/12 started out promising. It’s a fairly-priced over-under shotgun that looks good on the surface and seems to be engineered with the skeet and trap shooting market in mind.

However, upon testing the shotgun, it quickly fell apart -– sometimes literally.

The missing components discovered when we were firing the weapon soured us on the reputation of Yildiz, damaging any further evaluation.

We could look past minor errors in design, but the fact that we routinely missed shots with experts on our team did not sit well with us. You’ll always be able to tell the difference between lack of skills and shoddy gun design.

Our experts have the credentials to prove they know what they are doing with a shotgun. The Yildiz SPZ-ME/12 does nothing to make us think you should purchase it.

If you’re not a competitive shooter and you need something to keep you busy in the back yard, the Yildiz SPZ ME/12 is adequate. Just as long as it doesn’t fall apart.

But if you’re serious about your shotguns, you’re better off finding a more suitable replacement.

Finding an Alternative to the Yildiz SPZ-ME/12

If you’re really in the market for an over-under shotgun that will accompany you to the gun club or in the woods around your home, we have recommendations.

Our first choice is the Stoeger Condor, which is sturdy enough to work with an inexperienced shooter. In fact, there’s also a youth model available if you plan on training a future professional shooter. You won’t completely blow your budget on this gun, as it won’t run you any more than $300 to $400 for a brand-new model.

We also recommend the Stevens 555, which comes with an aluminum receiver that minimizes recoil. The entry price for this over-under shotgun is $650 to $700 new. That still compares to the price for the Yildiz SPZ ME/12.

If neither gun is a fit for you, you can find a number of affordable alternatives at bigger retail chains, or one of your local vendors.

What are your thoughts about the Yildiz SPZ-ME/12? Tell us what you think in the comments!